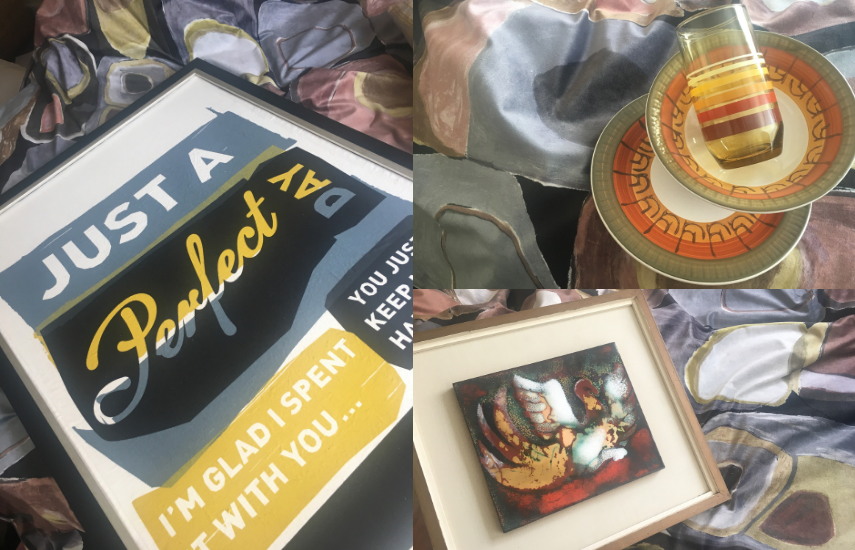 “I love the way objects sit next to each other, each one’s past bouncing off the other to tell a collective story.” – Comedian Zoe Coombs Marr

The most powerful objects in my life have personal meaning that shifts and changes over time as new objects are added and other ones released.

I’ve found this amazing fabric called ‘Paintbox’ by Carlucci Textiles. It’s a sumptuous velvet with a bit of a 1970s vibe. I think it’s going to be the latest re-upholstering experience for my 1990s sofa. Buying that sofa (half price at Myer but still a financial stretch at the time) felt like such a significant step into adulthood.

I’ve been pairing up some of my existing objects with this potential new fabric to see whether they can live harmoniously together.

A framed wall-hanging by Pony Rider bought many years ago that I wake up to see each morning. A reminder of the Lou Reed song which encapsulates the meaning of life so purely and never seems to age.

I bought the ‘Galaxy’ crockery and six orange striped glasses at McKay’s Mart on Unley Road. Established in 1912, McKay’s Mart has been in the Townsend Family since the 1940s, and is the oldest business on Unley Road. I remember going there to buy second-hand furniture as a child with my parents. It hasn’t really changed at all and I still enjoy regularly wandering through to see if any treasures await.

In my ‘apartment ready’ downsizing I’ve now given away all my other crockery except for this set. I’m committing to the things I love and enjoying their use every single day. I’m thinking of it as a ‘best in category’ approach to life.

The ‘Phoenix’ copper enameling is by my late aunt Dawn Baily from the late 1960s or early 1970s. She used to exhibit in group shows at Aldgate Crafts which was a gallery in the Adelaide Hills established in 1967. I remember gallery openings in the heart of winter complete with an open fire and grownups talking endlessly and drinking mulled wine (I’m still not a fan).

Each of these objects, old and new, has an individual story. But somehow I feel that the collective story they create by simply co-existing is even more interesting.

These objects are my autobiography. An edited autobiography of course! We all get to write, and re-write, our own story in our own way through the objects we choose to live with.