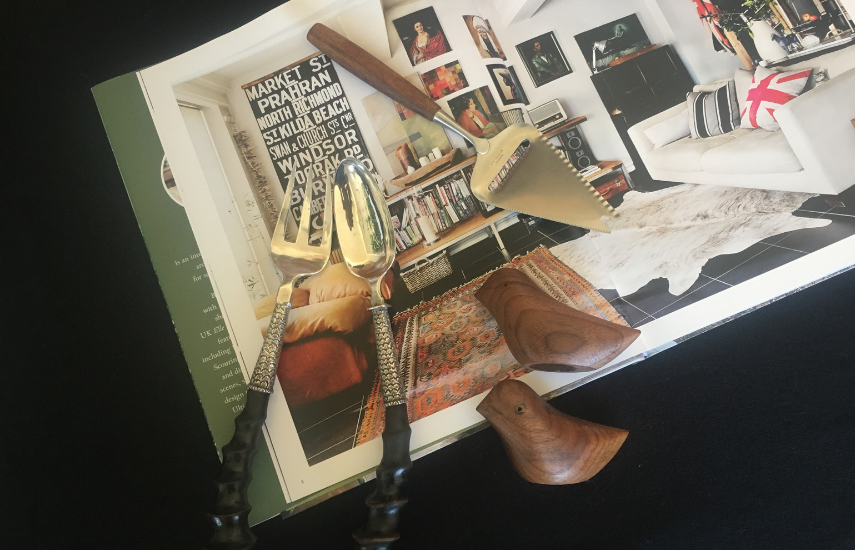 Knowing I’m moving to a smaller home is making me think deeply about each object I own. One by one weighing up their form, function and the memories and emotions embedded within them.

I’ve got at least 18 months before I move. My new apartment is currently just a billboard and a sales centre. So I have the luxury of time to approach this task in my own way. I understand that ‘my own way’ will seem chaotic to some. But I love having the space to look at each object as it captures my attention, rather than it being the next item on some sort of logical list.

I found this set of Mid Century salt and pepper shakers in the shape of birds when my cousin and I were clearing out my family home.  Perfect simplicity and so lovely to hold. They used to come out with the ‘good plates’ in the 1970s when there were guests for dinner. I don’t know why it seemed normal then that the salt and pepper came out of the bird’s eyes. Now it seems so painful! They will live the rest of their lives with me in a purely ornamental role.

My cheese slice is more functional. It was a gift from a treasured school friend who brought it back for me from her exchange year in Norway. Beautifully designed and made. It just needs a bit of oil every so often to nourish the timber so it looks its very best.

The silver plated servers with fish scale decoration and horn handles are of mystery origin. They too were found in my family home but I don’t remember them ever being used. They were blackened and filthy when I found them and needed professional attention and re-silvering. I assume they were originally owned by one of my grandmothers.

Was it my grandmother who migrated to Adelaide from London in the 1920s (imagine her shock at the size of her new city!)? Perhaps they were a farewell gift from the family she never saw again.

Or was it my other grandmother who travelled by ship around Asia in the 1960s? Did she buy them as a gift for my mother in a Hong Kong store?

I could feel sad that there is nobody left to ask, or I could feel happy that a beautiful object of mystery has come into my possession for a while.